The Steakhouse at Camelot

With a charming elegance that hearkens back to a time replete with fair princesses and knights in shiny armor, the Steakhouse at Camelot in the Excalibur resort impresses with classic yet innovative cuisine and a casual yet smartly sophisticated ambience. From within the kitchen, lorded over by Chef Jack Huxtable, comes signature dishes fit for a medieval king.  Such dishes include Bone-In New York Steak, Country Baked Meatloaf, Prime Rib, Deep Dish Chicken Pot Pie and a Flame-Grilled 10oz Angus Burger topped with BBQ jumbo shrimp and lump crab meat chipotle slaw. Welcome to the culinary Renaissance!

Excalibur's Steakhouse at Camelot: Fit for a King

Close your eyes and imagine for a moment, if you will, what it must have been like in the long-bygone era of castles, knights in armor and fairy princesses. There’s a certain romance that’s associated with visions of royal-esque intrigue, a mystery that dazzles our imaginations as imagery of long flowing gowns, glistening crowns, sculpted castles and the clashing of swords transport us to a mystically fascinating world. Acting like a proverbial time machine amongst the resort behemoths on the Las Vegas Strip is the Excalibur, modeled with a genuine sense of aura after the medieval fantasies of the past. Right down to its dining choices, Excalibur wows with an uncanny sense of realism throughout its castle-and-king themed atmosphere – and sitting atop its culinary indulgences like a reigning king on a throne is the Steakhouse at Camelot.

Indeed, the moniker “a meal fit for a king” is an overused cliché in many dining circles, but at Excalibur’s premium steak and seafood restaurant, it actually is endowed with validity. From the very entrance of the enchanting Steakhouse at Camelot, the medieval overtones carry into the open, sweeping dining room. Plush, Earth tone embossed semi-circular booths line two walls of the restaurant, while the remainder of the sprawling space is occupied by traditional tables with chairs and private dining areas. These private areas are amongst some of the most beautiful and inviting of the Vegas Strip fine dining establishments. They are divided amongst four subtly unique rooms and seat anywhere  from  eight to 25 people depending upon configuration demands. Dressed in classic medieval décor with richly embellished vibrant, velvety drapery, the Steakhouse at Camelot’s private rooms each have a distinct flair to them; three of the four rooms overlook the restaurant through glass partition detailing while one sits tucked away towards the very front of the main dining room for an intimate private dining experience. One of the other three – boasting luxurious, eye-catching window treatments – adds an additional amenity of overlooking the sweeping kitchen area.

The Earth tone applications are further embellished on the fabric of the wood-trimmed chairs and warm inviting carpeting, with perfectly complementing tablecloths finishing the impressive effect. A stocked wine vault and sexy bar/lounge area share some of these design elements as well; the lounge in particular exudes a trendy vibe for the ladies who regularly congregate there before or after attending Excalibur’s Thunder from Down Undermale revue show. The noteworthy wine vault houses the restaurant’s multitude of offerings, with selections designed to perfectly complement Chef Huxtable’s cuisine. Available in a rather simplistic orientation, for seemingly and refreshingly less confusion, are a plethora of domestic and international red and white wines including Rieslings, Sauvignon Blancs and Zinfandels.

As my guest and I were graciously accompanied to our sprawling, comfortable booth, we simultaneously took immediate note of how perfectly the Steakhouse at Camelot extended the entire ambience of the Excalibur resort. You do, indeed, get the overwhelming sensation that this wondrously open yet accommodating dining room wouldn’t be out of place in a castle dating back to the days of the Crusades. Behind the bank of booths on this far wall of the restaurant were thick, solid columns, illuminated from beneath for effective dramatics. Taking note of the clientele, average dress code adherence and overall vibe of the Steakhouse at Camelot, we reached an agreement on the opinion that this was an excellent representation of the “business casual” approach. Without even sampling one bit of cuisine at that point, we were impressed by an overtly friendly, hospitable staff – notably Room Manager William Espin – soft background music for ambience, and of course the casual yet elegant vibe and atmosphere.

With a sourdough bread basket before us, my guest and I began the foray into Chef Jack Huxtable’s master skills at the Steakhouse at Camelot. The Chef graciously prepared an appetizer sampler of sorts for us, incorporating a variety of the menu’s most popular selections and which included Pan Seared Maryland Crab Cakes in a stone ground mustard Beurre Blanc, Stuffed Mushroom Caps filled with prime rib and Vermont cheddar cheese, Applewood Bacon Wrapped Shrimp with cheddar and jalapeno remoulade and a Mesquite Grilled BBQ Beef Skewer with chipotle BBQ glaze and crispy polenta.

As we sampled the appetizer selections on our gorgeous, black and gold rimmed china plates, the first thing that struck us was the overwhelmingly delightful smoky aroma – and subsequently, flavor – of the Mesquite Grilled BBQ Beef Skewer. Deliciously tender and bursting with this heady and undeniably intoxicating smoked flavor which awakened our taste buds, the barbecued beef was served as generous glazed slices on the traditional skewer stick. The chipotle glaze was delicately fused with a sweet-and-sour element, further arousing the sensational flavor of the barbecued beef, while the unique polenta made for a wonderfully crisp accompaniment.

The Maryland Crab Cakes consisted of large lump crab meat with no filler. They exhibited premium, fresh flavors further enhanced by the tang of the creamy ground mustard sauce the cakes sat upon. We could almost taste the ocean in these delicious cakes, what with their lump crab meat melting in our mouths.

Almost a meal in itself, the Applewood Bacon Wrapped Shrimp were juicy, oversized, tender and absolutely delectable from the searing injection of the bacon’s smoky flavor. With a taste so rich, those who sample this appetizer won’t be able to resist closing their eyes and being transported to their happy place.

Perhaps most unique of all the appetizers on our plates were the Stuffed Mushroom Caps, exuding an explosion of flavor courtesy of the prime rib and Vermont cheddar cheese within them. My guest, who is an avid stuffed mushroom fanatic, could not stop commenting on the unique characteristics of this dish. What a special treat it was to sample a stuffed mushroom that was not filled with the traditional breadcrumbs, but rather with aged prime rib, cooked to perfection so it melted in our mouths. The background flavor of the Vermont cheddar cheese accurately complemented and further enhanced the bits of prime rib.

It’s often believed by modern-day fine dining aficionados that no experience at a respectable steakhouse is complete without the sampling of a Lobster Bisque or French Onion Soup. At the Steakhouse at Camelot, we had the opportunity to sample Chef Huxtable’s rendition of both of these crowd favorites. Impressive from the first spoonful, the Lobster Bisque exhibited a creamy, velvety characteristic that allowed the pieces of lobster meat simmering beneath the surface to melt in our mouths – likewise for the French Onion Soup, which brimmed with an unbelievably rich beef flavor beneath its baked cheese coating.

Completing the pre-main course selections was a Chopped Salad, consisting of mixed vegetables and tomato, avocado, diced egg and candied walnuts which sat on each corner of the ice-cold serving plates. Crisp, refreshing and a nice cleansing complement to the heartier, previously-served soup selections, the salad was dressed perfectly with a taste-bud-awakening house vinaigrette. The various mixed vegetables, tomato and avocado were diced proportionally to the farm-fresh-tasting egg bits, each contributing its own unique flavor to balance the salad.

Alas, we arrived at the main courses for the evening, presented by Chef Huxtable as select house favorites for us to sample. As the restaurant’s namesake implies, a juicy, tender and downright delicious 16-ounce Rib Eye was served “Oscar Style” which added crab and asparagus in a creamy béarnaise sauce. With each subsequent cut of the soft, buttery Rib Eye, the béarnaise bed which sat beneath it injected a wildly unique flavor to the steak; and although indeed succulent and richly-flavored, the 16-ounce cut of beef had some competition – vying for attention on our main course plates was a sampling from the Steakhouse at Camelot’s seafood offerings.

The Jumbo Stuffed Shrimp oozing with delectable crab created a fusion of heavenly aromas and tastes. The silky smoothness of the perfectly prepared shrimp simply became otherworldly with the addition of the bordering-on-sweet crab within. The “surf-and-turf” combination of sample entrees graciously prepared and brought to our table by Chef Huxtable were a delightful example of Camelot’s standout menu items.

The main dishes were served with classic steakhouse sides including Creamed Spinach, “Twice” Baked Potato and Bleu Cheese Potato Gratin, while both of our sample plates were garnished with green beans and carrot. The Creamed Spinach, in a word, was sumptuous. It was delightfully creamy with just the right amount of seasoned kick – the two potato sides were everything one could ask for in accompanying a fine steak and shrimp entrée.

Was there room in our collective digestive systems for more? It’s often suggested “there’s always room for dessert,” and keeping that in mind as Chef Huxtable graciously brought the meal-ending samplers to our table, we soldiered on. A creatively-oriented dish of Chocolate Covered Strawberries, Chocolate Lava Cake with a scoop of vanilla ice cream, Cheesecake with Raspberry Sauce and a Crème Brule were perfectly satisfying for any sweet tooth fantasy one might have. With each bite of the varied items on our dessert sampler, a bite of the strawberries covered in a thick layer of chocolate decadence made for a refreshing contrast of sorts. The Lava Cake was spongy, warm and intoxicatingly rich, heightened by the delightful vanilla ice cream, and the Cheesecake with Raspberry Sauce and Crème Brule were simply heavenly.

Amongst the infinite cornucopia of dining establishments the world over, there exists steakhouses and steakhouse experiences. The Steakhouse at Camelot inside the medieval-themed Excalibur resort in Las Vegas can be defined as the latter. Truly an extension of the enchanting ambience within the castle-esque walls of the Excalibur, the Steakhouse at Camelot brings the intrigue and mystery of a nearly ancient time to modern-day Las Vegas. 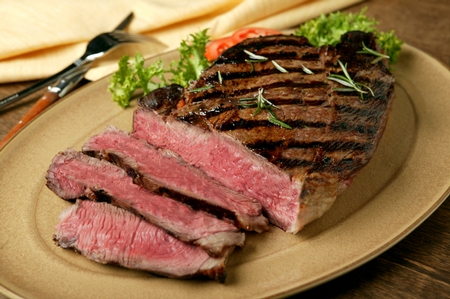 Add to Any Entree