Postrio features a diverse and elegant menu of contemporary American cuisine designed by Chef John LaGrone. Every dish is made with the finest quality ingredients sought from the best producers and farmers in the United States and beyond. From hand-made Parmesan-Potato Gnocchi with Oregon Chanterelles, Fennel-Crusted Yellowfin Tuna to the Grilled Prime Côte de Boeuf, every dining experience is exceptional. A casual menu of appetizers, signature Wolfgang Puck pizzas, pastas and entrees including the Lobster Club Sandwich are served in the Café overlooking St. Mark’s Square. Enjoy the restaurant’s house made desserts and an enticing wine list highlighting some of the most interesting wineries in the world. 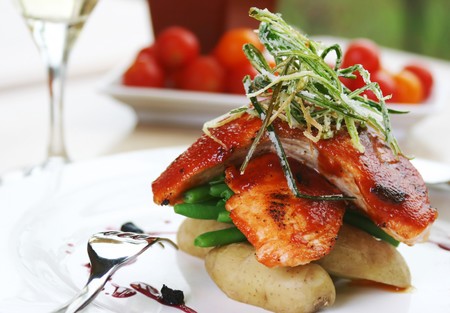 An epicurean delight! A phenomenal experience.

This is the restaurant to go when you want excellent food, service and drinks. My wife and I dined here for our 20th anniversary and it could not have been better if I had tried. We started with Appletinis/Martinis, drinks that have been so over-done as to be cliched, but not here. They were crisp and sweet and refreshing.

Our waiter was knowledgeable, prompt and engaging. You felt as if you were in some-one's home for the attention he paid. We had the seafood sampler platter to start our meal: it came complete with dipping sauces -- sweet, hot/spicy and cooling. It all blended together smoothly. For our entree my wife had the Surf and Turf (a prime rib and lobster) while I had the Pork chop with a side salad. When it comes to beef, my wife is a lot picky and said she kept expecting to find the tendon that is usually present in most restaurant beef, but it wasn't to be found, nor was there any fat! It was butter soft and melted in the mouth. My pork chop was incredible to look at, this was the largest pork chop I had ever seen. It was the pork chop of Homer Simpson's dreams: fat, huge, juicy and delicious.

Throughout the meal we were presented with several bread choices: try the olive bread and the lavach, they were delicious. No crumb was allowed to sully the vista of the linen, nor was there are spare space in the water glasses. We shared the flour-less chocolate torte that was a present from the restaurant -- and there are not enough words to describe just how perfect it was, coupled with the scotch, it made for one of the most memorable meals I have ever had.

Please if the opportunity presents itself dine here. Now, for the thing that was not so perfect: the restaurant faces St. Mark's Square and was quite noisy, and we were on the inside! And as the place filled with the late evening dinner crowd it got worse. However, in fairness, this has been the case for me at most casino restaurants. Also be aware of the pricing guide attached here, I think it shows three dollar signs ($$$), not correct. Be prepared to pay a premium for dinner, 4 dollar signs ($$$$) would have been closer to the mark.

Had lunch at Postrio since the Venetian offered it's guests a 25% coupon. I had a very nice Greek salad with marinated shrimp and a very light yogurt dressing and my companion had a hamburger that came with an onion relish that was indicated on the menu which she had on the side, but the hamburger came with aioli on it which was not indicated on the menu so it had to be sent back and removed. It was a nice beef patty served medium as ordered with a large cloud of thin fries. Service was friendly and efficient. We dined on the plaza where one can watch the passing parade of shoppers, gawkers and costumed entertainers or dine inside where the decor is pretty dark and miminalist. I was not terribly impressed with my two Puck restaurant experiences.