When dining abroad, the best rule of thumb is to eat where the locals are, even if that means surmounting a language barrier. For Japanese cuisine in Las Vegas, a different rule applies: eat where the Japanese tourists and expats eat.

This, of course, means a trip to Hamada of Japan.

Hamada serves Japanese comfort food—not Japanese-American comfort food. These dishes come straight out of Edo. An English-language menu aside, the atmosphere feels more like Ginza than Vegas. For more than 20 years, Hamada has dominated the “Best of Las Vegas” award for Japanese cuisine. (Both reader’s choice and editor’s picks. This is one of the few restaurants where the critics and masses agree.)

Nina and I picked a cold winter night to try Hamada. The restaurant boasts three Las Vegas locations (plus one at LAX airport, which I have mentally filed for the next time we fly to the Far East). We ate at the Hamada in the Flamingo Casino. The other Hamada of Japans are located three blocks east on Flamingo Road, and at the Rio.

Nori Kawagoe is the Executive Chef for all three restaurants, so patrons can expect consistency. (Should securing a reservation prove difficult, try another location.) Chef Nori is also a very busy person, if the size of the menu is any indication. Hamada boasts a seven-page menu.

The dining room is bright and spacious. Chef Nori wants guests to be able to see the high quality of the ingredients. Subdued shamisen music plays in the background. There is also the obligatory suit of samurai armor on display. I believe there is a law somewhere requiring the use of armor and shoji screens in Japanese restaurants.

Guests will find that the restaurant is comfortable. A full meal can be a multi-hour experience. I am rather tall. So I'm glad to report this is one of only a handful of restaurants I've been to in Las Vegas where I didn't feel cramped and could stretch my legs.

If you speak Japanese (I don't, other than a few polite phrases), you can practice with the staff. Everyone at the restaurant is a native of Japan. Often, patrons will hear more Japanese spoken than English as the tourists and expatriate file in for a taste of home.

Nina and I relaxed and settled in to read the expansive menu. We ordered two Sapporos because beer pairs better with sashimi, and also because there is no wine list at this restaurant.

Make no mistake, we came for sushi. Teppan is fun. The steaks are always good at a Japanese restaurant. But we came for the seafood. We're also picky about our fish, having lived in the Caribbean for so long. We are used to eating tuna that was caught that afternoon.

I started with a simple bowl of miso. Just like Nina is picky about onion soup, I'm picky about miso. Roughly half of the time, the soup is so salty I can't finish it. This, however, was miso the way it was meant to be. The dashi was well seasoned but not overly salty. The soup was subtle, with scallion flavor dominating, giving way to bonito and nori flavors. The tofu was firm yet silky. This was a great miso.

Nina started with an Ika Natto. This is one of those dishes you won't find at a typical Japanese restaurant. Natto soybeans are fermented to the consistency of homemade peanut butter. This has a very strong flavor, much like a soft cheese. It is piped onto strips of finely-diced raw squid and served with a soy sauce dressing and wasabi.

Next, we went "baka" on the sushi and sashimi menu.

Tuna was a must. Many aficionados judge a sushi bar by the Masago (egg) sushi. But we judge by the quality of the tuna. This tuna was as red as a bell pepper and just as shiny. The sweet fish literally melted in our mouths. We ordered seconds.

The salmon was buttery and firm. As much as I agree with aquaculture and farm-raised anything, wild-caught salmon simply tastes better. And when the fish has to stand up on its own, without even the benefit of heat, the wild Alaskan salmon makes a big difference.

I wanted eel. Nina wanted avocado. So we compromised with a dragon roll—barbecue eel, avocado, crab, and cucumber. All the ingredients were fresh and perfectly prepared. The sauce was tangy, and paired well with the creamy avocado and crisp cucumber.

My favorite sushi is the spicy tuna hand roll. This is a cone-shaped concoction of rice and spicy tuna tartare. One thing that hit me was how fresh the nori was. The tartare was zesty. Adding wasabi upped the flavor quotient. The end result was a great piece of sushi.

The albacore was our favorite of this course. This light-colored tuna had an aroma of sea foam, and was light as a cloud. One bite of this and you'll never want to so much as look at canned tuna again.

While Hamada serves every cut of beef expected from a Japanese steakhouse (including imported Kobe beef at nearly $20 per ounce), we opted for more traditional Japanese dishes.

Nina ordered the Tempura Udon. This traditional soup was filled with soft-as-tofu udon noodles that were at least a quarter-inch thick. A medley of tempura vegetables and two large tempura shrimp brought some heft to the dish. The tempura sweet potato was particularly good. Nina said this was a perfect choice on a cold day. The broth was light but flavorful, and the tempura and vegetables made this a hearty meal.

My entree came straight out of left field—Donburi. I ordered an Oyako Jyu which is fairly hard to find outside of Kyoto. Crisp but well-done sautéed onions sat on a bed of seasoned rice with chicken. A very over-easy fried egg was placed on top and the dish was served with pickled radishes. Paul Simon fans will appreciate the “Mother and Child Reunion” aspect of the dish. Oyokodon literally means “parent and child.”

This bento-boxed, poutine-like meal is popular everywhere in Japan. This is the original Japanese “fast food” with a lineage that reaches all the way back to the Meiji Restoration in 1868. This is not the best looking entree on the menu (truth be told, it looks like a scrambled mess over rice), but this is Japanese comfort food cranked to “eleven.”

As mentioned, Nina and I did not try anything from the terpane menu. But we could see the terpane dining room from our table, and the area was full of people having fun eating grilled meats with rice.

Our meal at Hamada was everything we expected. We wanted the traditional and that is exactly what we got. From the opening “konichi-wa” to the last morsel of donburi, Hamada gave us an evening in Japan at a fraction of the price. It’s easy to see why this restaurant is popular with both the locals and the Japanese expat community. 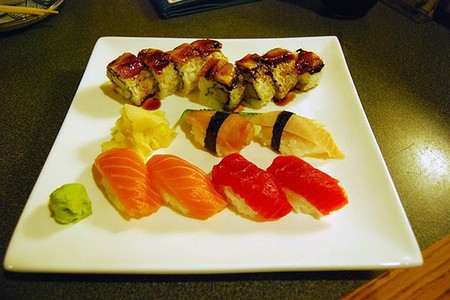 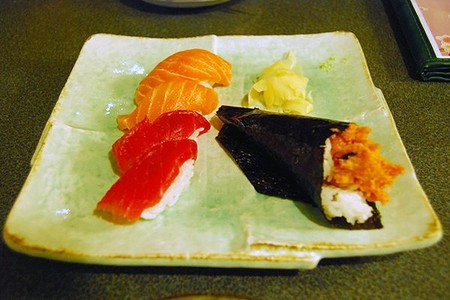 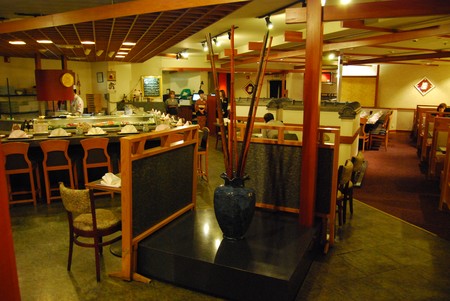