Award-winning chef Paul Bartolotta distinguishes his namesake restaurant in the Wynn with rustic, yet elegant, Italian coastal cuisine. The live seafood flown in daily from the Mediterranean is show-stopping. That alone, combined with startlingly authentic ingredients such as Sicilian olive oil and imported porcini mushrooms, makes Bartolotta a must-eat. The gorgeous al fresco dining space overlooks a dreamy lagoon, and a whimsical, two-level indoor dining room is a must-see. Understated, but still decadent, the AAA-Four-Diamond-rated restaurant is the closest diners will get to the shores of Italy on this side of the Strip.

Bartolotta Ristorante’s graceful, yet humble, entranceway disarmed us. Approaching the open threshold, we eventually realized that we were taking the first step in an unplanned journey that Saturday night.

The subtle Italian music played in the background, beckoning to us to enter an entirely different time and place. We descended a winding staircase to the dining room and headed to our table at the back wall, facing the inner action of the restaurant. The crimson and gold-yellow hues on the carpet, ceiling and furniture swirled around us. Immediately, the neon jolts of Vegas melted away. Bartolotta’s magical ambience was created for the same purpose that the menu was, to “give people here the opportunity to experience Italy from miles away, things they normally couldn’t,” said Alessandro Ferro, our Italian-born-and-raised server.

Since Bartolotta opened in 2005, it has been the venerable recipient of several industry distinctions, thanks to renowned Chef Paul Bartolotta, an Italian-trained, James-Beard-Award-winning chef. And now, three years later, a crowd still fills the restaurant to capacity until around 9pm, the time we arrived for our reservation. The café-style dining room and bar upstairs catered to a livelier crowd – from couples to a bachelorette group – and contrasted the mellower downstairs, where chatter pervaded the air with a moderate buzz, tame enough to allow guests to enjoy conversation with diners at their own tables.

We had planned to dine outside that night; yet the patio was closed because of the unusually chilly Vegas weather. But peeking outside the windows, I could see why there was usually a waiting list to eat al fresco in the private cabanas. You would feel like you’re dining in a midsummer night’s dream … seated among dim lights, a silver lagoon, and surrounded by bushes growing fresh red grapes. It’s not just the food that truly distinguishes Bartolotta from its formidable competition – it’s also the great lengths that the chief designer for the Wynn hotel, Roger Thomas, took in making sure diners feel that they have been transported to Tuscany. The space had been designed in painstaking detail – but not too painstaking to give off a stuffy, rigid feel. In fact, the décor married the perfect dichotomy of simple seaside and whimsical baroque.

Inside, smooth, black stones, typical of those found on the coast of Italy, adorned the walls, protruding out in rows, prompting us to turn around and touch them. Alessandro said they reminded him of his boyhood days on the beaches of northwestern Italy.

Startlingly authentic Italian ingredients rule the menu, which is divided into seafood and non-seafood appetizers, pastas, and main courses. It’s the kind of place where you need your hand held to make sure you don’t miss a beat or dish – so that you plot your journey perfectly.

Alessandro recommended we order a sampling of plates to fully experience the Bartolotta menu. Before giving his suggestions, he rolled over the infamous cart of fresh seafood—featuring shellfish that were still alive—from which we were to choose our signature entrée. The restaurant goes through 1.5 tons of fish per week, with most of them flown in fresh every day from the Ligure, Ionio, Tirreno, and Adriatico Italian-Mediterranean seas. We were amazed at Alessandro’s wealth of knowledge; he even held up a red shrimp, about 10 inches long, and explained it was a species found in the Mediterranean that is discernable only by its teeth (it has three teeth versus five teeth). The tray also held the hard-to-find slipper lobster and a langoustine, which is a hybrid shrimp/lobster from Iceland – yes, a sudden departure from the Italian theme, but no less rare than its counterparts on the cart.

All the fish are prepared oven-roasted, stuffed with parsley, olive oil, and salt – and of course filleted tableside. The shellfish options are grilled. Allessandro warned us not to be afraid to order something other than fish because the land-based food was just as exquisitely prepared, such as the Pan Roasted Milk Fed Veal Chop scented with rosemary-juniper. But having already seen the fish cart, there was no turning back for me, especially after the spiel on “the teeth.”

I could smell the white truffle oil right away when the Cappesante Dorate con Porcini arrived – two seared sea scallops, split for us in the kitchen, each surrounded with imported porcini mushrooms and garnished with a shaved slice of pecorino and sprig of parsley on top. We dipped forkfuls into the puddles of excess truffle oil spread around our plates. It was the truffle oil that brought me back to Europe, the last time I had tasted a winning scallop, and this actually tasted better...

By this time, our wines arrived. Mine – a glass of 2006 Kerner, a sweet white wine from Valle Isarco in Alto Adige; and my companion’s – a slightly more pungent white, a 2006 Soave (a blend of Garganega and Trebbiano di Soave) from the Inama vineyard in Veneto.

We ordered two more antipasti dishes, which arrived family-style – the first, Insalata di Piovra Ligure, was a Ligurian octopus salad cooked in vinegar, white wine, oil and lemon, served with small wedges of boiled potatoes. The octopus, with its slightly pink coloring, was diced into about two dozen one-inch pieces. It had a nice bite to it, a perfect accompaniment to the wines.

Our third appetizer, Insalata di Carciofi, Porcini, Ruchetta e Pecorino Sardo, featured sautéed artichokes and porcini mushrooms, wilted arugula, and Sardinian pecorino, which paired nicely with the fresh octopus. The large, thick slices of artichokes dominated the entire plate, with the smaller mushrooms and long strands of arugula interspersed throughout. The pecorino shavings matched the size of the artichokes, topping much of the dish. Notice how the porcini mushrooms and pecorino reappear here and throughout the rest of the menu. The interplay between the tang of the dry cheese and the slight juiciness of the mushrooms came out perfectly.

We chose red wine to pair with the pastas, on Alessandro’s recommendation. I tasted a 2006 Valpolicella from the Allegrini vineyard in Veneto. This was a combination of Corvine, Rondinella, and Molinara grapes, and was not too dry, with just enough sweetness to balance out all the cheese (and there was more to come). My companion sipped the 2005 Cerasuolo di Vittoria from Sicily’s Terre di Giurfo vineyard, made with Frappato and Nero d’ Avola grapes. His tasted drier and more rustic.

According to sommelier Jonathan Feiler, the goal of the wine menu, like that of the cuisine, is to “bring the best of Italy” to Bartolotta. With over 400 labels, most from Italy with some exceptions, it takes a little calculation to choose the “right” vino—which Feiler says is “the fun part”—but it’s not an exact science since the list changes every two weeks.

By now, we realized that if we were going to make it through to dessert, we’d have to pace ourselves. And we were glad we did because once we tried the sheep’s milk ricotta ravioli, Ravioli di Ricotta con Caciotta Toscana, there was not a morsel left on the plate. The sheep cheese’s texture inside the four creamy-white handkerchief pastas was the ideal combination of smooth and gritty. It tasted slightly sweet, yet still left room for a punch from the Tuscan pecorino cheese, which was slightly more pungent than the milder pecorino from Sardinia in our antipasti dish. The brown Marsala wine glaze drizzled on the top of the melt-in-your-mouth raviolis provided a delightful burst of color.

For a second pasta dish, we tried the Lasagnette con Ragu di Crostacei. The pasta resembled Fettuccini in width and thickness. Chunky pieces of lobster, shrimp, langoustines and crab hid between the pasta strands in a light white wine and tomato broth, but it was easy to spot the bright red pieces of tomato mixed in. This pasta, too, played on contrasting textures and tastes, with soft, sweet tomatoes complementing the bite of the shellfish.

I admit that I secretly hoped the main course would not be anticlimactic. Holding my breath as I took the first bite of my turbot or “Rombo” in Italian, I let out a sigh of relief – It was anything but. Alessandro filleted the fish tableside and split it in half for us. Plated in front of us with thinly sliced zucchini and roasted potato wedges, the turbot simply dissolved in my mouth. I even closed my eyes for a couple of bites. The fish itself was white in color and medium in thickness, but not the least “fishy.” When cooked correctly, turbot is so tender and moist, that it rarely needs a heavy sauce. Bartolotta prepared our turbot with only mere olive oil.

We were stuffed, but could still satisfy a sweet tooth. On another recommendation from Alessandro, we tried the Sformato di Cioccolato Manjari, espresso gelato served over an elliptical-shaped chocolate mousse, which was sitting in a pool of beige mascarpone sauce. It tasted similar to tiramisu, but lighter and more refreshing.

Like the Italians, we dined until almost midnight, trying to prolong the inevitable ascent up the staircase back to reality. Towards the end of the night, we spotted Paul Bartolotta himself walking through the dining room, pausing to greet Cat Cora, celebrity chef featured on television’s Iron Chef. (Bartolotta has also battled it out in Kitchen Stadium). For a moment, I was startled to see the juxtaposition of outside stardom infiltrating this pseudo-haven that we had found that evening….but I guess even the experts need to take a journey every now and then. 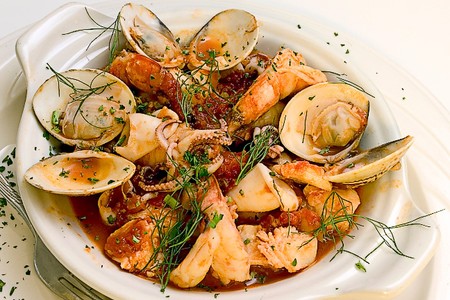 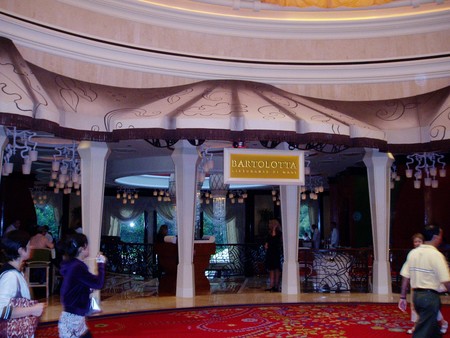 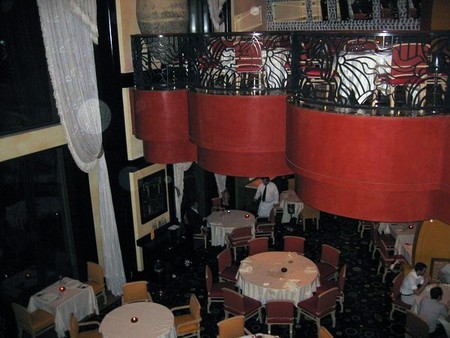 Does this restaurant offer outdoor seating?

Yes, there is outdoor seating available in private cabanas.

Are your pastas homemade?

Yes, our pastas are homemade.

How fresh is the seafood and shellfish that you serve?

Fresh seafood and shellfish is flown in daily from Mediterranean waters.

Do you serve lunch?

How late are you open for dinner?

How far is your restaurant from the Stratosphere Hotel & Casino?

This is a beautiful restaurant with great atmosphere and ambience. However, the restaurant does not deliver what the reviews promise for this Bartolotta's specialty - seafood. Although the fish was fresh, there was nothing special about the preparation or presentation. The "catch" of fish brought in from the Mediterranean is ridiculous. Some of the best fish worldwide comes from US shores, to include the Atlantic's Grand Banks. The service overall was good, but the waiter was loud and interrupted our conversation multiple times. The menu can be confusing, pairing some delicate fish selections with the options of sauces at the diner's choice, some of which will completely overpower milder fish. Other standard italian dishes were just not that good. The restaurant is very expensive as well, with a definite hint of arrogance. There are certainly better choices for far less. Wynn's other restaurants to include Okada were far superior, and were some of the best restaurants we experienced during our stay in Las Vegas.

Food was just ok we had a 9:15 dinner reservation - food was just ok - it arrived very quickly to the table - made us wonder if it was freshly cooked - service was not what I expected from a 5 star restaurant - they forgot to take our order for drinks, then they forgot to bring an espresso. We ordered a birthday cake which was outstanding. As we were celebrating a birthday and we had ordered a cake, perhaps, the restaurant should have highlighted this occasion by paying the birthday person's drink - just a thought.