This venue is no longer open.

808 Dishes Up a Feast for the Senses

Located off the main gambling floor in the heart of Caesar’s Palace on Las Vegas Boulevard, 808 has a strategic location along the famed Vegas strip, amidst the glitz and gaudy glamour of this famed city.  However, what makes 808 truly unique is chef and owner Jean-Marie Josselin’s Euro-Pacific inspired cuisine.  A classically trained French chef, Josselin draws upon his culinary roots as the foundation for many of his dishes.  Yet, Josselin also creatively infuses his dishes with an artful rendering of Japanese, Chinese, Thai, and Indian flavors. Just one glance at Josselin’s delicately and artfully prepared seafood and meat creations reveals his talent in Asian cuisine.

Josselin is recognized as one of the innovators of Euro-Pacific inspired cuisine, a fusion of flavors and techniques that he first pioneered in his original Hawaii-based restaurants during the 1990’s. His culinary background also includes presiding on the mainland as chef at the notable Bel-Air Hotel, Los Angeles, and the exclusive Mansion at Turtle Creek, Dallas, Texas.

The night we arrived at 808, the hostess had just walked away from her station to escort a couple to their table.  Rather than leaving us to stand and wait unattended, a waiter walked out and advised us that we would be taken care of upon the hostess’ return.  This impressed us as it was an indicator that 808 values its patrons and seeks to keep its guests happy.

Shortly, the hostess reappeared and guided us to our table.  The restaurant was already very busy, with most of its tables filled.  Ours was in the back of the room, set alongside a softly curved glass wall which separated the main room from the kitchen and gave us a panoramic view of 808.  Seated, we had an excellent opportunity to survey the restaurant.  Visually, the room emitted a minimalist Japanese feel created by the neutral earth tones of the taupe walls and dark rich wood chairs.  Fixtures and adornments were limited, although each perimeter wall featured a modernistic aquatic sculpture executed in silver-toned metal.   A thick glass wall that divided the room was similarly adorned.  However, one of the most inventive features of the décor was the ceiling, which was imbedded with large kidney-shaped, burnished copper “rocks” set into dark brown fabric.  The rocks created a riverbed illusion which emitted a subliminal sensation of flowing water.

The room’s lighting was subdued, with illumination coming from ceiling spotlights, wall sconces, and gently glowing table lamps.  The lighting was low, creating a soft luminescence that was just sufficient to see in.  While our proximity to the kitchen was close, we did not hear any noise. 808 buzzed with conversation, yet good acoustics controlled the volume, and the contemporary music playing that night didn’t compete against table conversations.

Our waiter, introducing himself as Rafael, welcomed us to 808 and gave us menus and wine lists.  One of the menus was a special version showcasing the day’s appetizers and entrees.  Everything looked tempting and I knew making a decision would be difficult in spite of already having previewed the menu from the web.

We were ready to celebrate our first night in Vegas so we began with wine.  My companion selected a Sauvignon Blanc, Brancott New Zealand and I chose a Sancerre, Hippolyte Reverdy.  The wine was generously served in individual carafes that were shaped like large, glass sake cups, a continuation of the Japanese decor.  Rafael poured a serving for each of us, leaving a portion for further enjoyment.  The Sancere was delightful – dry, green, grassy with a slight fruit aftertaste.  The Sauvignon Blanc had a bright, clean grapefruit finish.  Both wines were delicious.

While we mulled over the menu, a server stopped at our table offering a selection of warm bread arrayed in a basket.  The assortment – soft ciabatta, crusty baguette, and dried cherry – was irresistible.  We tried them all, cherry first.  Chewy, soft with a hint of cherry bite, the bread’s flavor wouldn’t overpower the food.  As we savored and sipped, we selected our appetizer and entrée choices then sat back ready to indulge.

I selected Rock Shrimp Risotto for my appetizer while my dinner partner chose the Bento Box Sushi.  Upon presentation, the dishes proved to be opposites both visually and aesthetically.  The risotto was served traditionally in a gleaming white porcelain bowl, yet the frothy foam perched atop the dish was inventive.  The risotto contained a decent portion of flavorfully tender rock shrimp and was laced with a relish of freshly diced tomatoes, olives and parsley. The slightly salty bite of the relish was offset by the risotto’s buttery, yet light beurre blanc sauce.  The froth was an infusion of orange and five spices which, when mingled with the beurre blanc, contributed a delicate juxtaposition of flavor.

The sushi was artfully arrayed in a bamboo compartmented box of six sections, each section holding a different rendition of this Asian delicacy. Of the six, the ahi tuna and scallop were particularly outstanding.  The bright color and clean texture of the ahi tuna tipped off the high quality grade of the tuna.  The sushi was partnered with a tangy Japanese mustard-ginger sauce, which was a perfect foil to the delectable fish.  The scallop, prepared with shredded phyllo dough and quick fried, was a contrast of textures: firm, mild scallop and crisp coating.  I would have liked more!

We finished our appetizers just in time for our entrees.  While 808’s menu included a diverse selection of fine meats, we’d opted for the restaurant’s specialty – seafood.  Sesame Coated Mahi Mahi was my entrée of choice while my dinner partner selected Slow Cooked Salmon.  The mahi mahi exemplified Josslin’s adeptness with Asian-inspired preparation.  The fish, coated in toasted sesame seeds and covered with a soy glaze, was sautéed and set atop a pool of Josslin’s delicate buerre blanc sauce.  A swirl of fish sauce amidst the buerre blanc added a salty bite.  The fish was light and perfectly prepared. Accompanying the dish were sautéed vegetables including bok choy, carrots, and zucchini.  The dish was a balance of buttery creaminess from the sauce countered by sharpness from the soy and fish sauces.

My companion’s salmon offered contrasting taste, texture and preparation to the mahi mahi.  Served atop a grated green papaya salad with Chinese vinegar dressing, the mild fish was flavorfully complemented by the zingy vinaigrette.  Slow cooked, the salmon was meaty with a moist texture and delicate taste.

We reserved a portion of our appetites for desert. The selections, diverse in flavors, were not heavy, predominated by light offerings such as mousse, sponge cake, and sorbet.  We opted for two desserts: 808’s “signature dessert,” the Toasted  Hawaiian, and Meyer Lemon Custard Cake.  One bite of the Toasted Hawaiian, a confection of caramel sauce, mousse and pudding, was sufficient to understand why it was 808’s signature dessert.  It was a delectably layered combination of smooth macadamia nut mousse and rich coconut pudding on a light yellow sponge cake.  The caramel sauce joined these flavors together contributing a depth of sugary brownness.  The Meyer lemon custard cake was a fresh rendering of sponge, berry compote and meyer lemon.  The flavors were a contrast of sharp lemon and creamy custard, with the berry compote adding a dimension of additional tart freshness.  The accompanying green tea sorbet balanced the palate.

All good things most come to an end, as did our dinner.  With all the dining options in Las Vegas, we were very pleased with 808.  We felt we’d experienced a rare opportunity to enjoy inventively and flavorfully prepared cuisine at a unique restaurant.  The service was impeccable and the atmosphere pleasurable.  On our next trip to Las Vegas, we agreed that 808 would be at the top of our list of dining destinations. 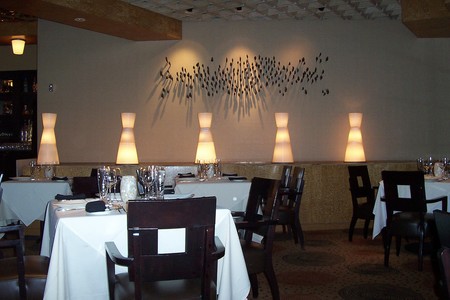 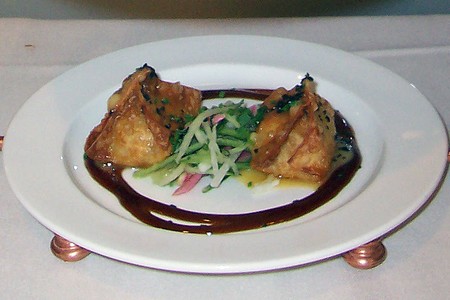 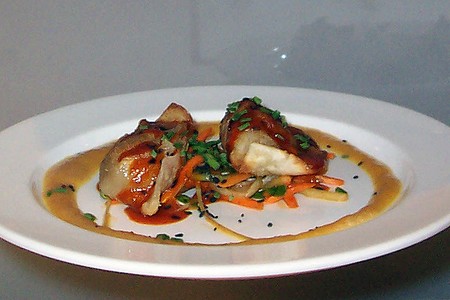 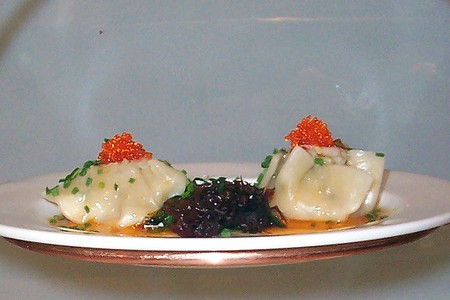 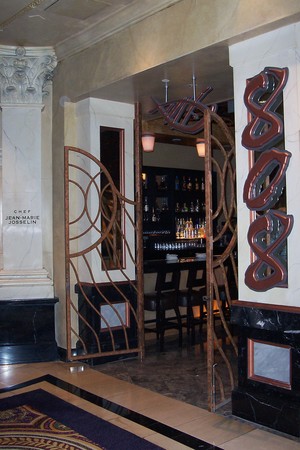 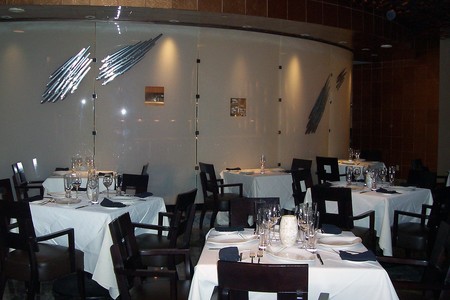 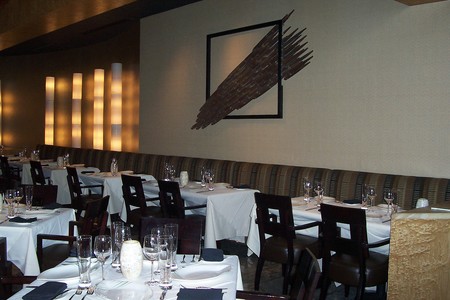 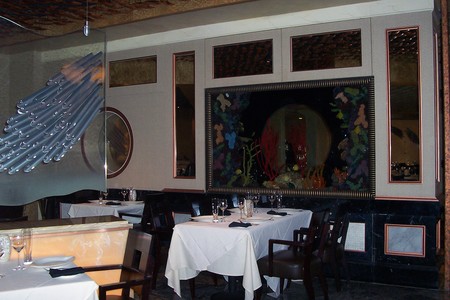 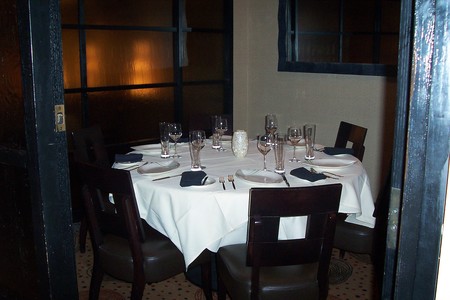 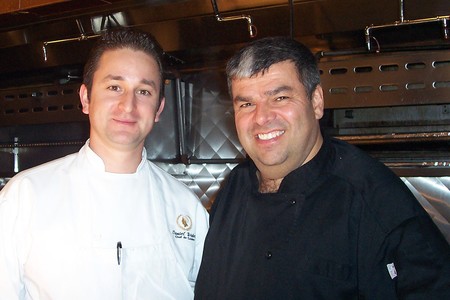 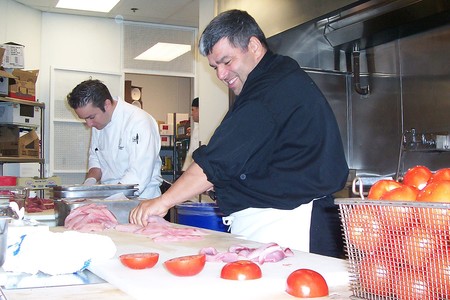 I'm not traditionally a huge fan of Pan-Asian cuisine, I chose 808 for my husband's birthday. I was so pleasantly surprised that we have gone back every time we are in vegas. The deconstructed Ahi-tuna and warm shrimp salad are our favourite starters. I can also highly recommend the roasted chicken and my husband really enjoyed the salmon. Not that we had room for dessert, the dessert sampler was amazing. I've also been craving their Fererra-Carbara Chardonnay since the wine last touched my lips. Beautiful atmosphere, and out of the way location make this a must-eat!

Does not honor reservations they make

Made a reservation here two weeks in advance. Flew into town, dressed up, and when we arrived for our 5:15pm reservation we were told that even though we had a reservation, that there was nothing available for us. They provided no explanation and were not sorry in the least. The best they could do to "try" and honor their reservation was to tell us "try and come back in 1+1/2 hours and we'll see what we can do." For the record we were polite and appropriately dressed, and it was 5:15pm (plenty early in the evening, they were not behind schedule) and the restaurant was half-empty. The sheer audacity to take a confirmed reservation, then to flatly deny that reservation for absolutly no reason is baffling and completely contradictory to the definition of a "RESERVATION".